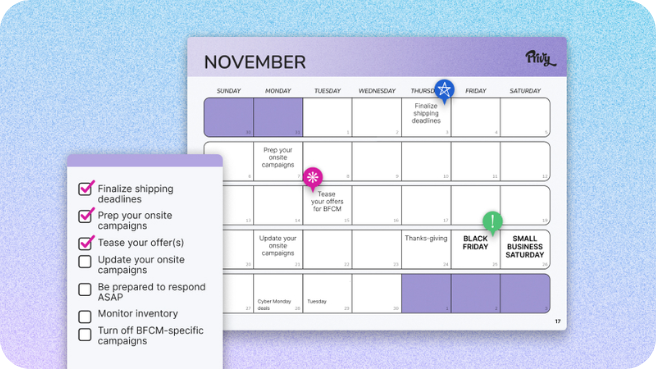 Get your BFCM 2022 Calendar today

Our exclusive guide, weekly email reminders, Google Calendar integration, and so much more to help you prep for this BFCM.

Get your BFCM 2022 Calendar today

Our exclusive guide, weekly email reminders, Google Calendar integration, and so much more to help you prep for this BFCM.

How Bombas Built A $100 Million Brand By Giving Away Socks

Randy Goldberg and David Heath were working at a media start-up when they learned a surprising fact on Facebook: socks are the most-requested item at homeless shelters.

They thought, “Why not build a company to solve this problem?” The business could give away a pair of socks for every pair it sold. They called the company Bombas, the Latin word for bumble bee (“bee better” is stitched into every sock).

When the pair pitched this idea on Shark Tank in 2014, only one investor bought in. The other sharks dismissed the idea, saying that the buy-one-give-one model wouldn’t be profitable. Six years later, Bombas exceeds $100 million in yearly revenue and has given away more than 20 million socks. How has the brand been able to sell so many $12 socks? Balanced marketing.

“Our very best marketing, from both a creative and performance standpoint, is where we are truly able to marry both mission and product,” said Bombas CMO Kate Huyett. From the start, Bombas’ co-founders knew an inspiring mission wouldn’t be enough to drive sales. To drive purchases, the brand’s marketing campaigns focus on the positive impact and quality of their product.

Crowdfunding: Introduce your mission and product with a fundraising campaign

Two years after dreaming up Bombas, Goldberg and Heath quit their day jobs and launched an Indiegogo campaign.

Their goal was to raise $15K in 30 days to fund their new business. The results were staggering. Goldberg and Heath raised $25K in just 24 hours and $140K overall. Reading these numbers, you might think, “Wow, those two landed on a great business idea!” And that’s true—but it doesn’t fully explain the success behind Bombas’ crowdfunding.

The core factor driving the fundraising was the way Bombas explained their brand on Indiegogo, not just the business concept itself. The crowdfunding page equally covers product and brand mission details, so visitors fully understand what makes Bombas’ socks exceptional. 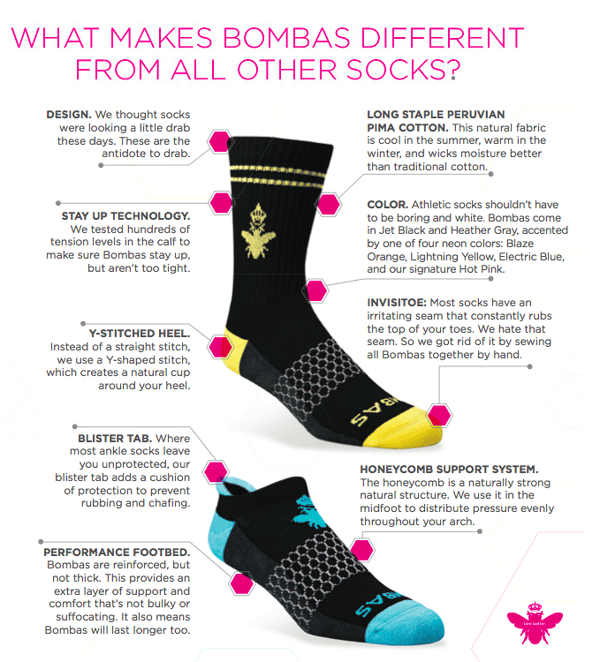 With this balance, the Bombas crowdfunding page was a powerful sales pitch. It told consumers what differentiated the brand’s socks and tugged at their heartstrings with information about the Bombas mission.

Takeaway: Understand your mission AND your product before asking for money

To communicate your product’s impact and quality as powerfully as possible, you’ll need to do some research. It took the Bombas co-founders two years of learning about socks and homelessness to verify their business idea was worth launching.

Not sure what exactly to research? Build knowledge about your mission and product concept with these tips.

This research is hardly overkill. After building this knowledge, you’ll be able to make a solid case for your product and mission on your crowdfunding page.

Podcasts and video: Tell your story with engaging, long-form mediums

After crowdfunding in 2013, Bombas made a 2014 appearance on the reality show Shark Tank that catapulted the business. Overnight, the brand was no longer a small company that relied on support from friends and family.

“Shark Tank was the first time we got a lot of attention,” said Huyett. “It put us on the map at a national level.”

With a broader audience, Bombas had to update their marketing. A crowdfunding page and word-of-mouth weren’t enough to keep brand awareness flowing at a national scale. The company needed marketing that could engage a large number of shoppers and communicate Bombas’ product quality and social impact.

Podcast and video ads were natural solutions. These mediums grabbed shoppers’ interest with audio and visuals, and they gave the brand ample time to explain their cause and product quality. Podcast ads were especially valuable for Bombas in its early years. Many people were listening to podcasts, but it wasn’t a crowded advertising space yet.

“In a given week, about 50 to 60% of our new customers are coming from paid,” said Huyett for Q4 2014. “Podcasting has ranged from 15% to 40% of that. It’s a pretty meaningful percentage of our paid portfolio.” Podcasts are still a valuable marketing channel for Bombas today because the host-read ads are so convincing. Shoppers’ trust in Bombas grows when they hear their favorite hosts rave about the socks and the company’s mission. “All the data we have suggests that they [podcasts] are profitable,” said Huyett.

Video marketing through YouTube content and TV ads has also helped Bombas build its audience and generate sales. “In terms of scale, we’re still seeing the best results in direct response national cable,” said Huyett. “In terms of LTV [lifetime value], actually YouTube is proving to have a higher first-average order value than any other channel.”

Why is video so effective for Bombas? The visuals show shoppers that the brand is true to their values of quality and service. They see a shot of the socks’ unique honeycomb stitching and seamless toes, and they know that the product is well made. 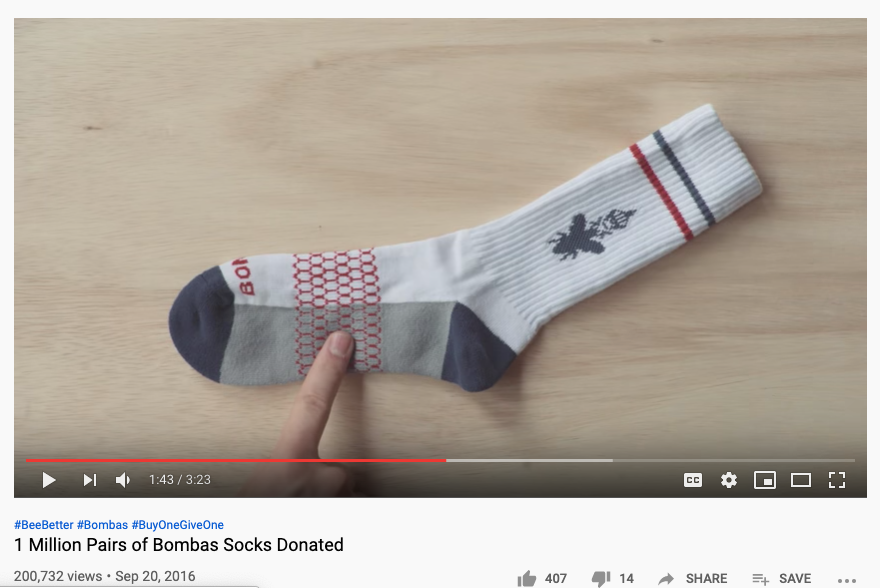 Likewise, Bombas can show footage of how the brand is helping homeless people, whether that’s a clip of their team at a shelter or a close-up shot of the socks that are donated. 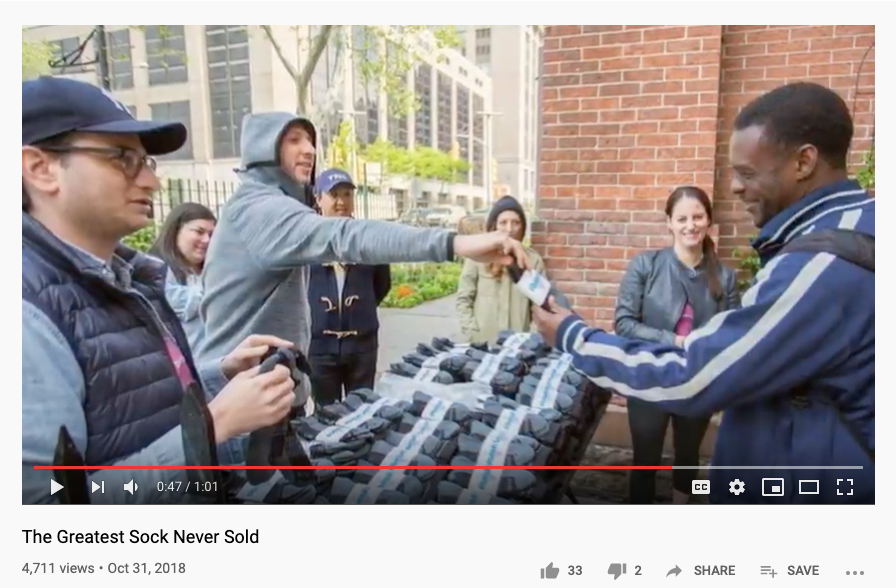 Bombas keeps their videos just short enough to hold people’s attention, but long enough to fully explain their business. Their YouTube content lasts anywhere from 20 seconds to 4 minutes, and it consistently pulls in millions of views for the company.

Conventional marketing wisdom says campaigns need to be snappy. Shoppers’ attention spans are shorter than ever before, we’re told, so grab their attention as quickly as possible.

Bombas’ marketing offers a different lesson. Many of their most successful campaigns take their time, whether that’s a podcast host gushing about the brand or a 3-minute-long YouTube video. These mediums give Bombas the space it needs to talk about the quality of its product and why they chose to make socks in the first place—a message that can’t be summed up in a flashy display ad.

If you’re running a mission-based brand, look for engaging marketing mediums that give you enough time to tell your story. You can always use podcasts, YouTube, and TV ads, like Bombas. Or, for an alternative video-based platform, check out Instagram TV. This relatively new social tool lets brands post long videos (10-minute limit for small accounts, 60-minute limit for large accounts). Consider creating a video series on Instagram TV about your brand’s mission and process for making your products.

In-store: Teach shoppers about your product and mission offline

From 2013 to 2018, Bombas’ annual revenue dramatically leaped from $300K to $102 million. The company had grown to a point where Goldberg and Heath felt comfortable dipping into wholesale. In 2018, Bombas began selling its socks wholesale through Nordstrom and Dick’s Sporting Goods. Today, the brand also sells its socks at Scheels and Athleta stores.

That’s just four companies. With over $100 million in annual revenue, Bombas has probably received offers to sell wholesale from many other businesses. But Bombas is selective when it comes to choosing wholesale partners because they know what an important lead generation opportunity it is.

“We’ve grown the wholesale side of our business slowly, just because we are trying to test and learn how to have success and how to tell our story appropriately,” said Goldberg. Focused on attracting high-value customers, the Bombas team only sells its socks wholesale if they’re able to educate shoppers about their mission and product in-store. The brand curates the wholesale shopping experience by: 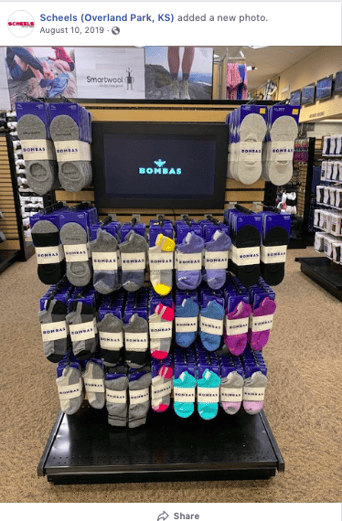 Bombas knows that shoppers at wholesale stores might dismiss their $12 socks without any background on the company. To keep that from happening, the brand goes the extra mile to educate in-store shoppers. After learning about the brand’s product design and the one-to-one model, people are much more likely to find the socks valuable.

As powerful as digital marketing can be, it’s hard to beat interacting with shoppers in person.

So, to attract high-value customers, consider selling your products wholesale with partners that have similar audiences and values to your brand’s. And make sure their shoppers can easily learn about your brand’s mission and products in-store.

If you’re not ready to make a wholesale agreement, another option is to set up a temporary pop-up shop. For just a few days or weeks, you can expose shoppers to your brand in person without making a major financial investment.

Marry your product and mission in your marketing

Shoppers appreciate brands with social causes, but that charity isn’t enough to drive a purchase. They have to believe in your product too—otherwise, they might as well donate to nonprofits directly.

Build their trust in your brand with marketing that’s focused on your product quality and your mission. If you communicate both ideas well (and truly do make high-quality products), shoppers will keep coming back to your brand—not only because they love your products, but because they love how they can make a positive impact with their purchase.